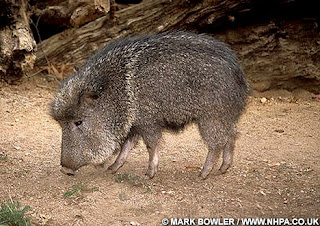 The Giant Peccary of the Amazon Basin

Recently, a new species of wild pig was discovered in the Amazon basin. The creature has been named the Giant Peccary and it at least twice the size of its nearest relative. Unlike other wild pigs, it has slightly longer legs and a smaller head. The legs are somewhat similar to the structure found on dogs, and the pig itself is about the size of a large dog. You can click here to read the entire story from the Daily Mail.

I might be a dork, but I get excited about stories like this. How often I have been thrilled by thinking on the fact that large sections of the world were once terra incognita. One thing I lament about the modern age is that all of the mystery surrounding out planet it gone; there is nowhere left to explore and nothing left to find and no phenomenon is unaccounted for. I cannot begin to imagine the awe felt by someone like Cortez or Magellan at coming in contact with completely new lands and civilizations, or the wonder felt by Aristotle at watching a lunar eclipse. That is why it still excites me when animals that we never knew existed are suddenly discovered and found to have been there all along. It preserves a tiny element of mystery at creation.

But this discovery has a certain bearing on evolution, as well. Think about it for a moment. Let's say that researchers did not find this pig alive, but found a skeleton of it instead that was fossilized. You know that the evolutionists would be saying that this was a precursor to the modern wild pig. They would point to its smaller head and its dog-like legs and say that it was a transition fossil of a dog turning into a pig, or something like that. Artists would do renderings of it and it would appear in science magazines as another proof of evolution. Anyone who knows anything about evolutionists knows that this is indeed how they operate.

Then suppose, if after all of this happened, the living Giant Peccaries were discovered. Then there would be quiet retractions buried deep in the F-sections of the magazines, but the damage would have already been done. We have seen this many times before, and it is certain that had the bones of one of these animals been uncovered first, it would have been touted as a proof for evolution. The Coelacanth, believed to be extinct for 60 million years until they were discovered alive in 1938. Since then, they have been found all over the world. A new species of Coelacanth was even discovered in 1997.

Take the Coelacanth. According to evolutionists, the coelacanth was a fish common to the world's oceans in from the Middle Devonian (410 million years ago) to the late Cretaceous (60 million). They had long been held to be exticnt. Furthermore, their fin structures were claimed to be the evolutionary precursors to legs, and many evolutionists asserted that in the coelacanth we saw the first instance of a sea creature evolving into a land animal. Then in 1938, one was found alive off the South African coast. The scientific world was flabbergasted. Could it have been somekind of evolutionary error? An accidental by-product of a long gone age? No, for it turned out that they have been caught pretty regularly since then; a second species of them was even discovered in 1997. They have been found in the waters by South Africam, Madagascar, the Comoros Islands, Mozambique, Indonesia, Zanzibar, Tanzania and Kenya. The coelacanth is not the only species this has happened with, either (check this National Geographic article for the supposed extinction of the coelacanth).

Just because we do not see something walking or swimming around on the earth normally does not mean that it doesn't exist anywhere; even less does it mean that a fossil of it proves evolution. Remember the Coelacanth and the Giant Peccary the next time a new fossil discovery is made purporting to prove evolution. Just think: what would happen if they would have discovered it alive first?
Posted by Boniface at 5:05 PM

but that guy looks like Porkypine Pig.... with a face only his mother could love.

i guess you think carbon dating is witch craft, learn some science if you plan to knock it.

I don't believe I said anything about carbon dating, but yes, I happen to believe it is untrustworthy, but not witchcraft.