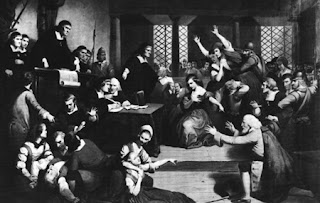 I have a very vast library at home, compromising probably over 600 books. I have never wanted to be one of those people who have a lot of books but never read them, and so I have made it a point to always be reading at least two books at once. This week I read three short little works. Two of them were stinkers, but the third ended up being very good.

The first book I read was The Prophecies of Nostradamus by Avenel Books (1980). I knew very little about the enigmatic Nostradamus before reading this book, but now that I have read it, I can let you know that I wasn't missing anything. Nostradamus' "prophecies" are the most obscure and ambiguous things in the world. More frustrating was reading that Nostradamus had explicit interpretations for all of his visions, but he chose to intentionally muddle them by writing them in obscure verse ("quatrains"). Here is an example of one:
The divine word will give to the substance
Heaven and earth, gold hid in mystic deed
Body, soul, spirit, having all power
As much underfoot as is heavenly seen (III.2)
What the heck does that mean? More amusing is the translator's attempt at interpreting the "prophecy." Under the verse is a little note that says, "Spiritual awareness yet to come?" Here's another, from quatrain V.83:
Those who have planned subversion
On the great, invincible, unequalled kingdom
Will act by deceit, with three nights' warning
While the great one reads a Bible at the table
Because of the word "subversion" in the first line, the interpreter thought of "subversive" and thus in the margin, writes "A Communist conspiracy?" The interpretations are almost as laughable as the prophecies. There are plenty of prophecies about the popes in Nostradamus' writings, but most of them are so obscure as to be uninterpretable. Nostradamus certainly knew the value of ambiguity in obfuscating the obvious. I'm throwing this book in the trash as I write.
The second book was a bit more interesting. It is called Was Karl Mark a Satanist? by Richard Wurmbrandt (1976). This book attracted my attention simply by its title. I had never heard of this book or its author, but apparently it went through four printings in 1976 alone. In the book, the author attempts to show that Marx (and many Communist leaders) were not atheists at all but were actually conscious, practicing members of a Satan worshipping cult, in the most literal sense. He goes so far as to say that Communist economic theory was only a front to get people involved in satanic worship. Very interesting, but he has precious little evidnece to back it up, mostly writings of Marx and Engels taken out of context. One enigmatic point he brings up, however, is a quote from the memoirs of Marx's housemaid, in which she writes of Marx:
"He [Marx] was a very God fearing man. When very sick, he prayed alone in his room before a row of lighted candles, tying a sort of tapemeasure around his forehead."
The author rightly wonders what Marx, an avid atheist, could have been doing in this bizarre prayer ceremony. He suggests the possibility that the "tape measure" was a Jewish phylactery (Marx was an ethnic Jew), but says more than likely that it was some kind of demonic ritual. There is no way to be sure, but it is kind of tantalizing. Nevertheless, the author ends up making unsubstantiated claims to prove his outlandinsh point (on page 20, he says, "Have you ever wondered about Marx's hair style? Men usually wore beards in his time, but not beards like his..."); the author goes on to assert that Marx's hairstyle is some kind of proof of his belonging to a demonic cult. I don't know how he can say men did not wear long beards in the 1860's; he must have never seen any pictures of American Civil War generals. Another book in the trash.
The third book I read turned out to be very factually accurate, well written and an overall good read. It was entitled The Witchcraft Hysteria of 1692 by Leo Bonfanti of the New England Historical Series (1971). It is a simple chronological recounting of the Salem witch trials pieced together from the court documents and the memoirs of those involved. While the witch trials were a very tragic thing (19 were hung as witches), a very interesting but overlooked fact is that some of the accused witches had objective evidence against them that seemed to verify the charge that they were indeed practicing witchcraft. For example, the West Indian slave woman Tituba who started the whole scare freely confessed to being a witch and confessed to teaching the Salem girls about Voodoo. I ought to point out that she confessed to being a witch willingly without even being asked and was not pressured in any way to speak. Another woman eventually hung as a witch, Bridget Bishop, was found in possession of several rag dolls with pins stuck through them; they were hidden in a secret chamber in her cellar and found by a workman demolishing the wall. There were a few other incidents like this as well.
The author seemed to just gloss over them, starting from the presupposition that there is no such thing as witchcraft. I'm sure most of the people who sufferred as witches were innocent, but what of these instances when rag dolls with pins stuck in them are found? I started thinking that perhaps there was a kernel of truth behind the accusations, especially in regards to the slave woman Tituba who taught the kids about Voodoo and demonstrated her powers of hypnotism on some of them. It is a horrible thing any innocent person should be accused and condemned of any crime, but I can more easily sympathize with persons who errantly believed innocent persons were witches than I can accept persons today who willingly support and welcome actual witches.
Well, just wanted to let you know what was in my mind this week.
Posted by Boniface at 8:51 PM

Books are so cool..... something you can do when your wife has recognized another of your shortcomings, and is not speaking to ya. hehehe

I have gone to the next step. While most of my library is shelved and organized, I have been accumulating a few very old works that were scanned and are now available via internet only on PDF (unless one has the money and resource to obtain a copy somewhere).

So, while they are wonderful books in the apologetic arena..... man, it is tough to read from the PDF.

Glad there is something in your mind this week :)

Want some clarifying data from an unexpected source?

If you'd like some stunning insights into what's happening with the synchronicity of the recent comet and Nostradamus' Lost Book buzz, then read the article at the following link. I demonstrate significant internal evidence from these Lost Book images that they were indeed dictated by Nostradamus and that they encode much more earthshaking revelations than so far published.

First I went to the site you linked to. (shakes head in fit of laughter)

Then I went to your place of employment. Again I told them "no lettuce on the quarter pounder" . But, as N predicted, they just don't listen anymore.