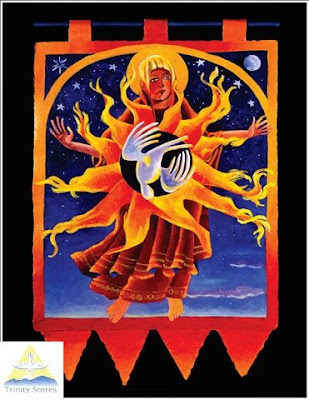 Traditional Catholic DO NOT fart.

The incense the air.

Br. Mickey's tastes have evidently led him to work for the USCCB. Birds of a feather??? www.beestill.org/meettheartist.html

What is THAT?! "Our Lady of the Octopi"?!?!? Is it hunting that poor dove or has the dove died in mid-flight upon seeing such an ugly banner?! Honestly...in the name of all that is sacred!

"It is my mission to banish from the Church all images of Jesus and Mary where they are portrayed perfect and spotless." ("...and replace them with icons of myself and the USCCB!")

"Have you ever seen that "Infant Jesus of Prague" image? My friends and I like to call that the "Barbie Jesus." ("...that's because in the Spirit of Vatican II we think it's a good thing to demean on our Lord and Savior!")

"St. Terese of Lisieux is my favorite saint because she never mentions the word "sin." ("...in any other language except French. Darn her!")

"You know, Mary and Joseph were not Catholic. They were Jews." ("...I just read this on the back of a cereal box the other day...")

"Of course, we believe that Christ is the Way to God, but since Vatican II the Church teaches that the Word of God comes to all cultures." ("...via Jack Chick tracts...")

"Judgment is not from God. People who judge others have never read the Bible" ("...the 'New Vatican II Version' that is.I have it in pink bonded leather.")

Thank you for letting us know what goes on at these things!

We can only hope that some bishops who had been unaware have been reading your notes.

i happened to have a wonderful time there. and i thnk it was just what some catholic teens needed. to get away from tradition and praise God through diverse song and worship. it saddens me to hear your immature remarks at the end of this particular blog. i beleive everyone did a great job there and my kids have come back with so many memories, new friends, and the word of God to spread to others. i hope that maybe next time you can be more open minded,or maybe just not even go. God does not focuz on denomination and while yes, i am very proud to be catholic...CHRISTIANITY is the religion, dont compromise it with denomination. God Bless!

Let me respond to your comments one at a time:

i happened to have a wonderful time there.

Well, I'm delighted that you had a wonderful time. Unfortunately, that has nothing to do with the theological soundness of the event.

i thnk it was just what some catholic teens needed. to get away from tradition and praise God through diverse song and worship.

That is precisely the problem with today's Church; they think they need to get away from our Tradition, when in reality, our Tradition holds infinitely more than any novel methods of praise and worship that are modeled on Protestantism.

God does not focuz [sic]on denomination and while yes, i am very proud to be catholic...CHRISTIANITY is the religion, dont compromise it with denomination.

Secondly, Christianity IS Catholicism, plain and simple. If you don't believe it, check out the Cong. for the Doctrine of Faith's declaration this summer on Lumen Gentium that said that other Christian communities could not even really be called churches at all. We are the one true Church lady (or sir), and that is Church teaching. You may not like it or you may not agree with it, but you must understand that it is not me you are disagreeing with, but 2,000years of Catholic teaching.

I stumbled across your blog, as I live in the Columbus, Ohio area. I happen to be Protestant, but not in all the ways you describe. I have a deep respect for both the Catholic and Orthodox traditions, and just wanted to chime in and humbly ask that you not be so quick to paint all protestants with the same dismissive brush. There are a good many of us who would be just as horrified by the nonsense described at your conference as you are. Describing everything wrong in the Catholic church as "protestant" stings quite a bit, especially to those of who are appalled by those same things. Thanks for your writings, and keep it up.

That's a great point. If you remember, check back later and I will do a new post about this. Probably tomorrow or the next day.