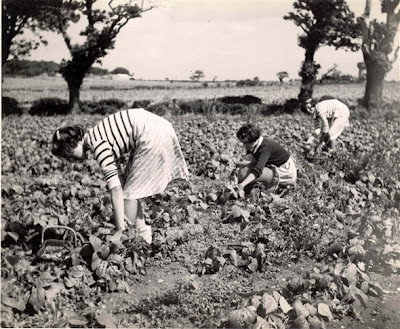 American girls picking beans in the 1940's. Wait a minute! I thought that was a job "Americans won't do," wasn't it?

In looking at the problem of immigration in this country (and it is a problem), there are several arguments that are usually put forth by those in favor of unrestricted immigration (both legal and illegal) by which they attempt to support their point. I can think of four main ones right of the bat:
Reason 1) Immigration is good for the economy because they provide a source of labor for jobs that American's won't do.
Reason 2) Our country is made up of immigrants. Immigration is essential to what America is; we cannot keep out immigrants without being hypocrites.
Reason 3) Immigration is just, because the illegal immigrants who come here are only trying to better themselves and their families, something which they have a right to do.
Reason 4) The USCCB says it is a good and Christian thing to do to allow unrestricted immigration.
I am sure there are other reasons put forth as to why open immigration is a great thing, but I think these are the main ones (although I'm going to disqualify number 4 right out of the gate because the USCCB bases it's conclusion on the first four reasons, and because the USCCB holds absolutely no water with me. Therefore, I'm going to ignore the USCCB and hope it goes away). In this particular post I propose to deal only with Reason 1, which I think is the stupidest one but is one of the reasons most frequently cited. "Immigrants do jobs Americans won't do." My economics professor tried to sell us on this one today. I think this phrase was originally coined by President Bush a few years back when he was pushing his immigration reform (aka, amnesty) bill. Since then, spokespeople in favor of unrestricted immigration and illegal alien amnesty have ceaselessly repeated this mantra until people have started to believe it.
The rationale is that immigrants are willing to do tasks that are seen to be beneath the dignity of most Americans, jobs like bean picking, janitorial work, menial services and agricultural services. Since no American will do these jobs, we need the immigrants to do them. Beans need to be picked, yards mowed, strawberries harvested and floors mopped. Since immigrants are the only ones who will do these tasks (since they are jobs American's "won't do"), massive immigration is an obvious solution to the labor problem.
First of all, the problem with these "jobs Americans won't do" is not with the jobs themselves. It is not below the dignity of any American to do any work. You find any disgusting, filthy, difficult, unrewarding, socially taboo job out there and there is somebody willing to do it. Seriously! We have no lack of Americans willing to get knee deep in feces in order to suck out a septic tank; we have no shortage of of American carnie's who travel around with our circuses; we have no shortage of embalming specialists willing to work with dead bodies; we have no shortage of sea men willing to work on Alaskan oil rigs for months on end or sail the storm-tossed Great Lakes for four months out of the year during shipping season. We have no shortage of police willing to take up the thankless and life-threatening task of patrolling places like South Central L.A. Truly, Americans are willing to do any job. The question is one of pay, not one of the job being below Americans' dignity.
So what about the pay? Well, in all of the above mentioned jobs (shipping, policing, cleaning septic) there is a degree of skill involved that demands a skilled worker, who usually commands more for his services than an unskilled worker. And thus Americans are still found in these jobs. Our standard and price of living here is ridiculously high, and so an American worker (especially if he has a family) must make massive amounts of money to support himself, not because he is greedy, but just because everything is so expensive. Now, the so-called "jobs Americans won't do" are all low-skill jobs. They have always paid low; janitors always got paid less than policemen. But at least there was a janitor's union that saw to it that they could command at least a living wage. Unskilled jobs always pay less, but until the last few decades, an American could still make a sufficient living from unskilled labor.

In comes the immigrants. Because they are unskilled, unskilled labor is the only kind of work they can do. They always are willing to work for less than an American because they do not share our living standards and because much of the money is sent back to their home country. When they enter the workforce, they drive the price of labor down. This phenomenon has been so well documented in American history that I am surprised anybody still questions the fact that immigration drives down the price of labor. So, whereas public school janitors used to get paid $12-$15 per hour, now school districts can privatize and hire immigrant labor who charge only $7 - $9 per hour, if that. No American can support himself on that wage. Thus, janitorial work for the public schools soon becomes a job Americans won't do. They can't anymore. Immigrants came in with a wage advantage that nobody could compete with, drove the wages down until only other immigrants could afford to take the jobs, and then the job becomes a job American's won't do.
I would be happy picking strawberries! I really would. I've been a janitor; it's not bad work. It is not that I won't do them, but I won't do them for an immigrant's wages. Raise the wage, and Americans will do the job. It is certainly true that there are jobs Americans can't do, but the jobs have become that way because of immigration, and obviously we do not want an economy built on jobs that American's can't do. Our economy cannot sustain itself on that philosophy. That is what needs to be rectified. But let's stop all this nonsense about jobs Americans won't do. It makes it look as if we think we're too good to work. I know a million people who would gladly take a menial job, but not at $5.75 per hour.
I can think of one job that American elected officialts won't do: deporting illegal aliens. This seems to be the one job that no American elected official wants to touch with a ten foot pole. 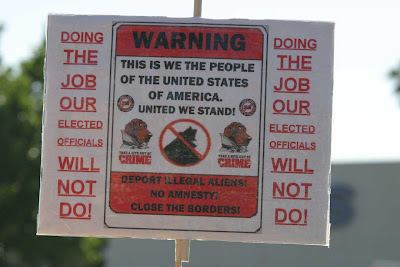 I think that's a well thought out argument. It's a very good post. I also hear from time to time that illegals form a lot of the backbone of the American work force. That's a bunch of bunk too. Remember when all the illegals "went on strike" a couple of years ago. Do you know what happened that day? Nothing! The country still functioned without so much as a hiccup.

your argument is good, and there's nothing i there that i disagree with for any economic reasons. its simple market economics, and youre right.

but i would like to here you comment more on the humanity of deporting all illegal aliens who are here now. is that really feasibly or even desirible? there IS an extent to which we, as Catholics, must be charitable, and for me that means finding a way to integrate them into America, as legal citizens who pay taxes, work, and support our society.

Knowing something about how economics works does not mean that you understand economics, just like knowing how to make an axe doesn't mean that you can split wood.
Get more educated on the situation, and you will find that it is the Free Trade system between us and Mexico, and the fact that we do not really support higher paying jobs to emerge within the Mexican state that we have the problems with immigration that we do. Tighter borders will only lead to the humanitarian border problem turning into an epidemic.
That is why I think we should support an open-border, freedom of movement system between our two states. This will solve the charity issue, or at least make it more solvable, and will strengthen our position in the realm of global politics.

"I'm going to ignore the USCCB and hope it goes away"