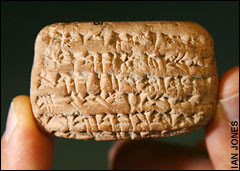 A cuneiform tablet recently discovered and being studied in Britain has been found to contain what some are calling the most important discovery in biblical archaeology in 100 years: an Assyrian tablet from around 595 BC (the reign of Nebuchadnezzar) mentions a certain chief eunuch of the king named Nabu-Sharrussu-ukin; so what? Well, the same name appears in Jeremiah 39 as Nebo-Sarsekim, described there as Nebuchadnezzar's "chief officer." While I am naturally excited that yet another piece of archaeological evidence has been found supporting the historicity of the Old Testament (and by the way, not a single piece has been found contradicting it), it is sad that some are so excited by this find. You see, the reason this find is so exciting to the archaeological community is because, in the words of Irving Finkel, British Museum expert, "This is a fantastic discovery, a world-class find. If Nebo-Sarsekim existed, which other lesser figures in the Old Testament existed? A throwaway detail in the Old Testament turns out to be accurate and true. I think that it means that the whole of the narrative [of Jeremiah] takes on a new kind of power."
In other words, this tablet proves that the Old Testament just might be true (*gasp!*). Notice how shocked Mr. Finkel is that something in the Old Testament "turns out to be accurate and true." It is so shocking to him as to be worthy of great attention. It sure is nice of Mr. Finkel to let us know that this little tablet proves what the Catholic Church has already been believing since the time of Christ. We must remember, those these finds are exciting and faith-building, out faith in no way rests on them at all. It is sad that the scientific community bases the credibility of the Scriptures on things as insignificant as cuneiform tablets. If he just would have asked me, I would have told him that the Old Testament was historical, just as all the saints and doctors before me would testify as well. But they never ask us.
Click here to read the whole article in the UK Telegraph.
Posted by Boniface at 9:12 PM