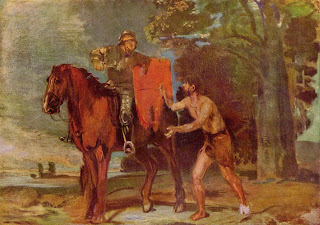 M for SAINT MARTIN, in Mitre and Cope
(The bishop of Tours, not Saint MARTIN the Pope);
His father, a soldier, disliked and despised
The True Faith, and prevented his being baptized
By making him serve in the army of Gaul,
Though he wasn't that sort of a soldier at all.
At Amiens one day, in the wind and the sleet,
He was stopped by a beggar who begged in the street;
He'd no money to give, so he made a great tear
In his cloak and gave part to the beggar to wear.
That night in a vision Saint MARTIN was shown
Our LORD as He reigns on His heavenly throne;
He was wearing the piece that the beggar had worn!
For CHRIST takes what we give to the poor and forlorn.
(Alphabet of Saints by Msgr. Robert Hugh Benson).


The above is my 18 month old's absolute favorite book. My wife and I love it too. It was written around the beginning of the 20th century by the son of the Archbishop of Canterbury turned Catholic priest (that caused quite an uproar). If you have kids, I can't recommend it highly enough. He also wrote two companion volumes (which we haven't yet acquired) called A Child's Rule of Life and Old Testament Rhymes.
Posted by Anselm at 1:10 PM