How long is a homily supposed to be? 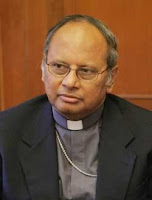 The Secretary of the Congregation for Divine Worship and Discipline of the Sacraments, His Excellency Most Reverend Malcolm Ranjith Patabendige , recently gave another statement regarding the Motu Proprio to the Italian journal Petrus (if you recall, Ranjith made news last month with his statement in the Netherlands that those who resisted Summorum Pontificum were instruments of the devil). The new statement reiterates his earlier calls for episcopal obedience in allowing free reign to Summorum for the implemenation of the Tridentine Mass. Fr. Zuhlsdorf has posted the entire interview (here) and I will not repost it on this blog, but I did want to quote an interesting statement that the Archbishop made regarding the length of homilies.

After talking about abuses of the Novus Ordo and episcopal resistance to the Motu Proprio, Ranjith goes on to cite long homilies as one form of liturgical abuse that is seldom mentioned. This point is very timely; I have often thought on this, but the abuse of long homilies often sneaks under the radar because of the manifest nature of the other more grievious abuses. Ranjith points out that despite the unity of the Liturgy of the Word and the Eucharistic Sacrifice, it remains the case that the Eucharistic liturgy is the center of the Mass and that the homily ought to be a simple and brief explanation of the readings with an exhortation to pursue holiness, not a long, drawn out affair full of the priest's personal opinions and personality quirks. Interestingly enough, he draws a connection between the entertainment oriented worship that so often occurs with the Novus Ordo and the possibility of the development of a personality cult with regards to the priest who happens to be a gifted speaker: "I have to laugh when I hear it said, even by friends, that in a some parish, a priest is a ‘saint’ because of his homily or how well he speaks. Holy Mass is sacrifice, gift, mystery, independently of the priest celebrating it. It is important, nay rather, fundamental that the priest step aside: the protagonist of the Mass is Christ. So I really don’t understand these Eucharistic celebrations turned into shows with dances, songs or applause, as frequently happens with the Novus Ordo."

So how long ought a homily to be? Ranjith says that 10 to 15 minutes is an adequate time to explicate the readings, exhort the faithful and dispose their minds to marvel at the sacred mystery that is about to be carried out on the altar:

"I’m against dances and applause during Masses, which aren’t a circus or stadium. Regarding homilies, they must be about, as the Pope has underscored, the catechetical dimension exclusively, avoiding sociologizing and pointless chatter. For example, priests jump onto some political point because they didn’t prepare their homily well, which really ought to be scrupulously worked on. An excessively long homily is synonymous with poor preparation: the right length of time for a sermon should be 10 minutes, 15 at most. You have to remember that the high point of the celebration is the Eucharistic mystery, without of course intending to downplay the liturgy of the Word, but rather to make clear how to carry out a correct liturgy."

By the way, sorry about my brief posts; this has been a very busy week!
Posted by Boniface at 10:03 AM