Did the Great Flood occur in November? 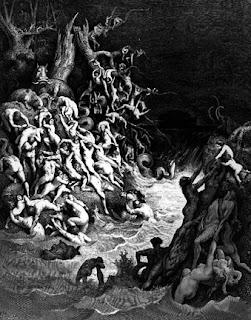 I was just made aware of this excellent article by Dr. Frank Humphrey on Halloween, the commemoration of All Saints and All Souls Day and the connection with the Great Flood of Noah. In this article, Dr. Humphrey attempts to show by appeal to Scripture, history and the religious traditions of other cultures that the Flood of Noah occured in October-November. A key to this theory is pointing out that most cultures celebrated their New Year sometime around November and that there was often a commemoration of death and rebirth around this time. It is a very interesting article (linked here) and I suggest you peruse it. He is a Protestant, but I think most of his reasoning is solid.

That being said, I think you could just as easily say that the fact that many cultures celebrate New Year in the Fall has more to do with the reaping of the harvest and the end of the agricultural year. In discussing the Flood, it is pertinent to recall the Catholic teaching that the Flood of Noah was (1) a true historical event, and (2) that it was anthropologically universal (ie, that it killed all men). We are not required to believe that the Flood of Noah was geographically universal (that it covered all land), but I think there is good evidence that this, too, was the case. Many Church Fathers take varying positions on things like how to interpret the seven days on Genesis, but there is not a single Father or Medieval who takes the Flood as anything but history. The Catholic Encyclopedia says: "The Deluge is referred to in several passages of Scripture as a historical fact; the writings of the Fathers consider the event in the same light...the Bible story concerning the Flood has never been explained or understood in any but a truly historical sense by any Catholic writer. It would be useless labour and would exceed the scope of the present article to enumerate the long list of Fathers and Scholastic theologians who have touched upon the question. The few stray discordant voices belonging to the last fifteen or twenty years are simply drowned in this unanimous chorus of Christian tradition."

Click here for an earlier post on the historicity of the Flood.
Posted by Boniface at 9:15 AM