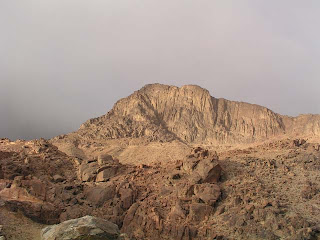 I have been so busy with NCYC and many other personal issues that I have not had time to continue this series I was working on earlier last month about the location of Mt. Sinai. For those of you who are new to the blog, I love biblical archaeology (please visit the "Where is the Ark of the Covenant?" section on the sidebar) and the question of the location of Mt. Sinai is an important one. Last time, we looked at the historical evidence in favor of the traditional site on the Sinai Peninsula, Jebel-Musa, on which sits St. Catherine's Monastery and which has been held to be Mt. Sinai from at least the 2nd century AD. Historically, this precedent is the only real evidence for the traditional Mt. Sinai, and it has stood the test of time mainly because no other site has been put forward until the 19th century. This time, we will look at evidence within the Scriptures themselves to see if we can pinpoint the site of Mt. Sinai.

One Scriptural argument in favor of the traditional site is where the Bible places the border of Egypt. According to Exodus, when the Israelites left Goshen and passed Succoth, they were "out of Egypt" (Ex. 13:8-20). Were Sinai further east in Arabia (as some say), then they Israelites would have had to go much further than just out of Goshen before they were "out of Egypt." Nadav Na'aman, a professor of Bible geography at Tel Aviv University, made an important point in an article on the "Brook of Egypt". He states, "Traditionally, in the eyes of the Egyptians the Nile or the Isthmus fringes were considered to be their northern boundary, the Sinai peninsula being regarded as part of Asia...Thus, when their scribes were concerned with the southern coastal area exclusively, they considered its border to be the southernmost limits of the urban settlements in this region, Sinai having the status of a kind of 'no-man's land'." This seems to be why Moses and the Israelites are able to travel out of Egypt by simply leaving Goshen, but are nevertheless not out of the reach of Pharaoh yet.

A very important consideration is the fact that Exodus 2:15-3:2 seems to place Mt. Sinai in the land of Midian, which all biblical scholars agree is in Arabia. This is the case because Moses' father in law, Jethro, is the High Priest of Midian (Ex. 3:1) and it was while watching his father-in-law's flocks that he had the epiphany of the burning bush at Mt. Horeb (which almost everybody considers to be the same as Mt. Sinai). While it is certain that Jethro was a Midianite, is it certain that Sinai was in Midian?

While it is true that Jethro was a Midianite, is is not the case that Sinai is in Midian. Exodus 3:1 clearly tells us where it was: "Moses was keeping the flock of his father-in-law, Jethro, the priest of Midian; and he led his flock to the west side of the wilderness, and came to Horeb, the mountain of God." Here we see that Horeb, far from being in Midian, was on the otherside of a vast wilderness, which Scripture refers to as the "west side of the wilderness." West of Midian there is nothing other than the Sinai peninsula, which the Egyptians treated as a no-man's land. This would fit well with Scripture calling it a "wilderness." Perhaps our view of Sinai being in Midian has been colored a bit by the 1959 movie Ten Commandments, which places Jethro's tent at the foot of Mt. Sinai. The image is vivid; in my mind I can still see Charlton Heston gazing up at the movie Mt. Sinai from the tent of Jethro. But in reality, Horeb/Sinai seems to have been a long way west of Midian across a vast wilderness. This supports the traditional site.

An even keener insight into the location of Mt. Sinai in the Sinai Peninsula (and by the way, we ought to keep in mind that the peninsula was named for the mountain, not vice versa) is given by Exodus 18:27 and Numbers 10:30, both of which relate the visit of Jethro to Moses at Mt. Sinai. At the end of his visit, Jethro (whom we know to be from Midian), goes home. Scripture says in Ex. 18: "Then Moses let his father-in-law depart [from Mt. Sinai], and he went his way to his own land." If Mt. Sinai and Midian were in the same place, how could Jethro return "to his own land" if his own land was the same land Sinai was in? Numbers says: "I [Hobab] will not go, but I will depart [from Mt. Sinai] to my own land and to my kinsmen." Again, the land of Jethro (Midian) is completely separate from the land where Mt. Sinai is.

Let's recap: we know Sinai is not in Egypt, but east of it somewhere. We also know that Jethro, Moses' father-in-law, came from Midian (Arabia). We know that wherever Mt. Sinai was, it was not in the same land as Midian (Ex. 18:27, Num. 10:30). Finally, we do know from Exodus 3:1 that Mt. Sinai is on the west side of Midian across a great wilderness. Now, we must ask, what "wilderness" is east of Egypt but west of Arabia? The only plausible answer seems to be the peninsula that is now called the Sinai Peninsula and is the site of the traditional Mt. Sinai.

A challenge to the traditional location of Mt. Sinai is Galatians 4:25, when speaking of Hagar, St. Paul says, "Now Hagar is Mount Sinai in Arabia." This could be a great problem, until we realize that St. Paul does not use the same geopolitical terminology that we use today. He would have been speaking in Roman geopolitical terms. In Roman times, Arabia was a province that extended from the Nile into what is now lower Syria. The Roman province of Arabia at this time entirely included the Sinai Peninsula, so it is perfectly legitimate for Paul to say that Mt. Sinai is in "Arabia" but mean what we call Sinai. Interestingly enough, the Roman province of Arabia did not include the Saudi Arabian peninsula. Paul could not have had Saudi Arabia in mind when he said Mt. Sinai is in Arabia.


What does all of the evidence suggest? Last time, we saw that if Mt. Sinai is in the Sinai Peninsula, the mountain on which St. Catherine's is built (or one in that immediare range) is the only credible possibility. Scripture seems to place the mountain in the Sinai Peninsula, and Josephus confirms this when he says that "Moses went up to a mountain that lay between Egypt and Arabia, which was called Sinai...." (Against Apion, 2:2 [2:5]). This seem, at least at the outset, to confirm the traditional location.


Next time, we will look at an alternate site that some claim to be Mt. Sinai: Jebel-al-Lawz in southwest Saudi Arabia.
Posted by Boniface at 1:18 PM