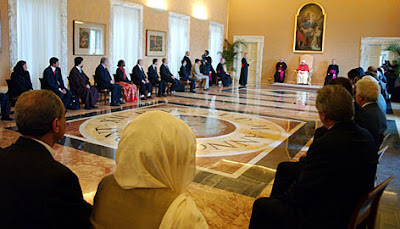 This morning, Pope Benedict XVI responded to last month's "Open Letter" from 138 Muslim scholars calling for a new dialogue based on love of God and love of neighbor. The document issued by the Pope today (and signed by Tarscicio Bertone) is addressed to Prince Ghazi bin Muhammad bin Talal, a Jordanian academic thought to be the leader of the effort. Before I say anything about this letter (and there are some positives and some negatives), I will reproduce it in its entirety here:
Your Royal Highness, On 13 October 2007 an open letter addressed to His Holiness Pope Benedict XVI and to other Christian leaders was signed by one hundred and thirty-eight Muslim religious leaders, including Your Royal Highness. You, in turn, were kind enough to present it to Bishop Salim Sayegh, Vicar of the Latin Patriarch of Jerusalem in Jordan, with the request that it be forwarded to His Holiness.


The Pope has asked me to convey his gratitude to Your Royal Highness and to all who signed the letter. He also wishes to express his deep appreciation for this gesture, for the positive spirit which inspired the text and for the call for a common commitment to promoting peace in the world.


Without ignoring or downplaying our differences as Christians and Muslims, we can and therefore should look to what unites us, namely, belief in the one God, the provident Creator and universal Judge who at the end of time will deal with each person according to his or her actions. We are all called to commit ourselves totally to him and to obey his sacred will.


Mindful of the content of his Encyclical Letter Deus Caritas Est ("God is Love"), His Holiness was particularly impressed by the attention given in the letter to the twofold commandment to love God and one’s neighbour.


As you may know, at the beginning of his Pontificate, Pope Benedict XVI stated: "I am profoundly convinced that we must not yield to the negative pressures in our midst, but must affirm the values of mutual respect, solidarity and peace. The life of every human being is sacred, both for Christians and for Muslims. There is plenty of scope for us to act together in the service of fundamental moral values" (Address to Representatives of Some Muslim Communities, Cologne, 20 August 2005). Such common ground allows us to base dialogue on effective respect for the dignity of every human person, on objective knowledge of the religion of the other, on the sharing of religious experience and, finally, on common commitment to promoting mutual respect and acceptance among the younger generation. The Pope is confident that, once this is achieved, it will be possible to cooperate in a productive way in the areas of culture and society, and for the promotion of justice and peace in society and throughout the world.


With a view to encouraging your praiseworthy initiative, I am pleased to communicate that His Holiness would be most willing to receive Your Royal Highness and a restricted group of signatories of the open letter, chosen by you. At the same time, a working meeting could be organized between your delegation and the Pontifical Council for Interreligious Dialogue, with the cooperation of some specialized Pontifical Institutes (such as the Pontifical Institute for Arabic and Islamic Studies and the Pontifical Gregorian University). The precise details of these meetings could be decided later, should this proposal prove acceptable to you in principle.


I avail myself of the occasion to renew to Your Royal Highness the assurance of my highest consideration.


Cardinal Tarcisio BertoneSecretary of State
I think this was a tolerably well-thought out response by the Holy Father. It is not as strong as I would have liked, of course (there are no calls for the Muslims to convert and accept the Gospel), but neither is there any dribble about us praying together or any nonsense like that. Let's look at a few of the strong points of the letter.

First, Benedict refernces Deus Caritas Est in the context of love of neighbor. This is a very subtle point, but very important. In Islamic theology, Allah cannot love us the way God the Father loves in our Faith. Allah relates to his people as a master to slaves, but not as a father to children. Thus, the concept of God being substantially love is foreign to Islam. Allah may be merciful, powerful, all-knowing, etc. But he is not love and he certainly is not father. By referring to Deus Caritas Est, Benedict reminds them of the vast difference in the Catholic conception of God and the Islamic belief.

The next part is what I particularly like. If you recall, the Muslim letter said that we ought to base our common ground and our dialogue on two religious doctrine that they believe we share in common: belief in one God and love of neighbor. Both of these, although common to many religions, are nevertheless religious doctrines. Now, look at how Benedict responds:

Such common ground allows us to base dialogue on effective respect for the dignity of every human person, on objective knowledge of the religion of the other, on the sharing of religious experience and, finally, on common commitment to promoting mutual respect and acceptance among the younger generation.

Notice what he did? The Muslims asked to base dialogue on the religious grounds that we worship the one God and love our neighbor. Benedict turns around and says that we can base our dialogue on "respect for the dignity of every human person, on objective knowledge of the religion of the other, on the sharing of religious experience and, finally, on common commitment to promoting mutual respect and acceptance," all of them natural, worldly things. I like the line "objective knowledge of the religion of the other," which draws a good distinction that we can have dialogue with each other without having to accept each other's faith; objective knowledge of each other's religion suffices. I am not sure what "shared religious experience" means, but I don't think he means it the way JPII did at Assisi. But what Benedict categorically did not say is, "Okay, let's base our dialogue on love of God and love of neighbor, just like you said." No; he understands that their god is profoundly different from ours and that the way Muslims "love" their neighbors (like by taxing them for being Christians?) is not the type of love Jesus mentioned. Therefore, he accepted the call to dialogue, but gave different, more worldly ground son which to base it.

This letter has many weaknesses, too. I wish he would not have invited them to a meeting. If they accept, I hope he actually preaches the Gospel to them. That would be nice. But probably it will turn into some clap-trap about mutual understanding, fruitful dialogue and reciprocal respect. I think people imagine that just learning about each other will help us get along. Well let me tell you, it is precisely because I know exactly what Islam is that I despise it so much. So, just learning about each other's religion is not going to do anything at all. Let's pray to Our Lady of Victory, St. John Capistrano and Pope St. Pius V that this"meeting" does not turn into another Assisi.
Posted by Boniface at 2:10 PM