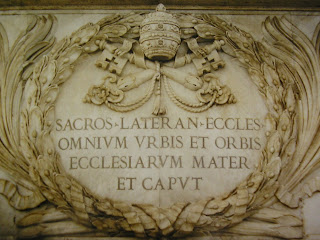 The Mother and Mistress of all Churches throughout the world, the Church of St. John Lateran, or the Archbasilica of the Most Holy Savior, was the first publicly consecrated. It was built by Constantine, the first Christian Emperor and consecrated by Pope St. Sylvester I on November 9, 324.


The Church of St. John Lateran is the highest ranking of the four patriarchal basilicas of Rome. Its name derives from the fact that the site of the Church was in acient times occupied by the palace of the Roman family of the Laterani. It was originally dedicated to our Savior, the "Basilica Salvatoris." Its further dedication both to St. John the Baptist and to St. John the Evangelist came at a later date due to the adjoining Benedictine monastery of Ss. John and John. Catholic Encyclopedia article: Saint John Lateran.
Five ecumenical councils were held at the Lateran (1123, 1139, 1179, 1215, 1512-17). The Fourth of these is justly famous for its exposition of the dogma of Transubstantiation. Perhaps on his return Boniface, much the more knowledgeable historian than I, will be able to offer some insight into the historical importance of each of these councils.
Posted by Anselm at 6:41 AM